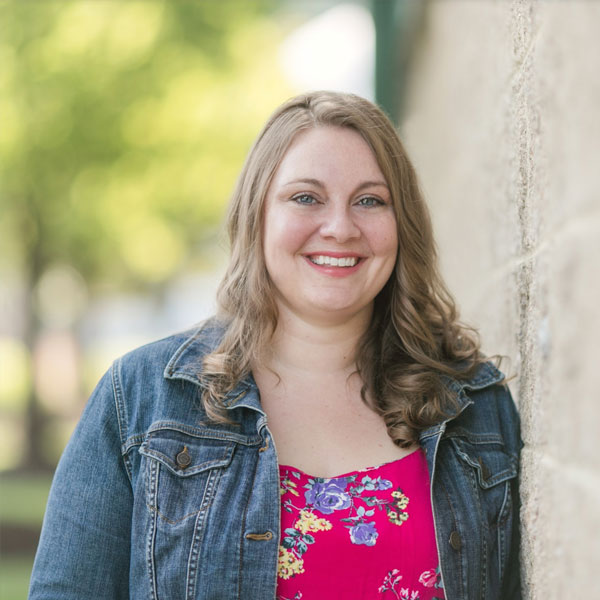 Many sellers rely on Amazon FBA for inventory storage and order fulfillment. Participating in the FBA program comes with many benefits, most notably Prime eligibility for fast shipping.

However, there are also many challenges associated with storing inventory at FBA. Recent fee increases, frustrating restock and storage capacity limits, and time spent waiting for inventory to be received are among the top issues FBA sellers face. Restock limits were particularly difficult for many sellers during the recent holiday season. Keeping hot items on the shelves while balancing restock limits and shipping delays is not easy.

Amazon recently announced a new FBA capacity management system with the goal of giving sellers more control over their FBA inventory capacity. Restock limits and storage limits will be combined into a single monthly metric known as the FBA capacity limit.

According to Amazon’s official announcement, this new system “will give most sellers great capacity limits, provide more predictability and greater control to get more capacity when sellers need it.” Amazon will also allow sellers to offer bids for additional storage capacity. FBA capacity limits will go into effect on March 1, 2023. Keep reading to find out how it works.

Amazon has streamlined its weekly restock limits into a monthly metric to help give sellers additional lead time for better inventory planning. The previous system relied on two different types of limits (restock limits and storage limits) which were measured differently, often leading to confusion.

The FBA capacity limit simplifies this into a single monthly metric that determines how much inventory you can send to and store at FBA warehouses. Your capacity limits for the upcoming month will be provided in the third full week of each current month in the Capacity Monitor in Seller Central as well as via email.

How are FBA Capacity Limits Determined?

Capacity limits consider both on-hand inventory in FBA fulfillment centers and shipments you’ve created that haven’t arrived yet. Amazon will also provide you with estimated limits for the following two months to make it easier to plan for a longer time frame. Amazon’s forecasting will include anticipated FBA space and labor availability. The estimates can vary based on how efficiently you’re currently using your FBA capacity, as measured by your IPI score.

Amazon will set the capacity limits and measure your inventory usage in cubic feet rather than a number of units. This provides a more accurate estimate of the capacity needed in fulfillment centers and delivery vehicles. However, since many sellers prefer to plan in units, Amazon will also continue to display inventory usage in units along with an estimate of how many units you can store at FBA based on specific cubic volume capacity limits.

Overage fees will apply if your on-hand inventory (not including open shipments) exceeds your FBA capacity limit. The fees are based on the highest estimated or confirmed capacity limit you were provided for the given time frame. These fees are in place to help prevent excess inventory and shouldn’t impact sellers with healthy inventory levels. 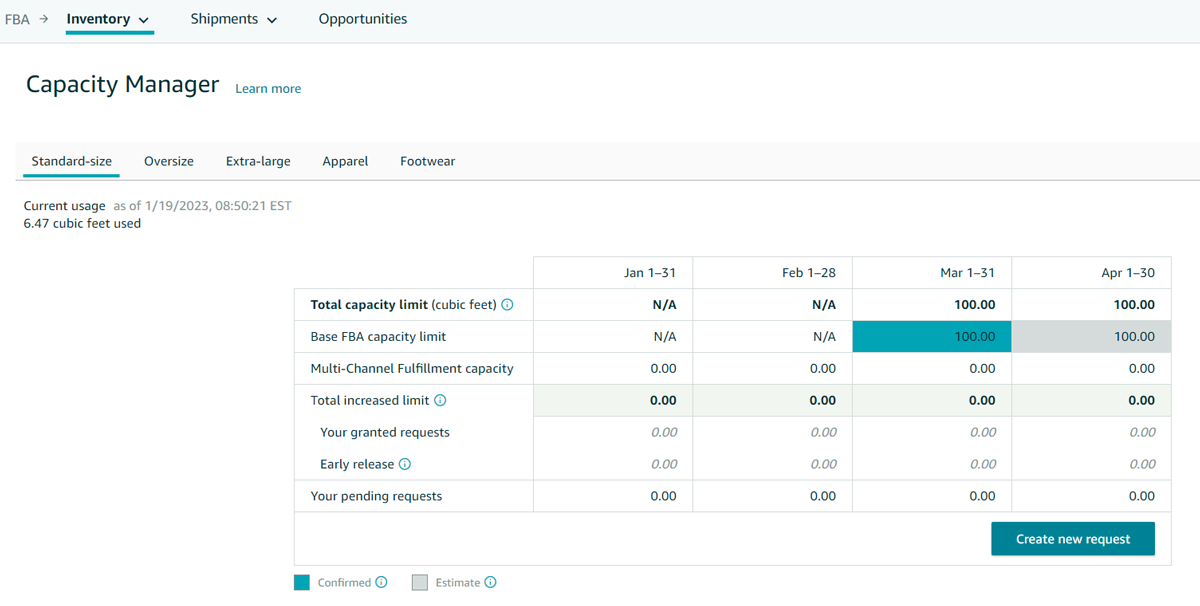 The goal is to give sellers more control over their FBA capacity while limiting unproductive storage. Amazon has tested this program with a selection of US sellers. Storage limit increases can be requested in monthly increments for future periods in which you already have a capacity limit or estimated capacity limit.

You can request the greater of up to 20% of your initial FBA capacity limit or 2,000 cubic feet. You’ll also set the maximum reservation fee you’re willing to pay for extra capacity.

Amazon will assess current fulfillment center capabilities about twice a week and grant storage limit increases when available. If you receive additional storage space, you’ll earn a $0.15 performance credit for every dollar of sales generated from the extra space. This gives you the opportunity to offset the entire reservation fee if you sell through your additional inventory. 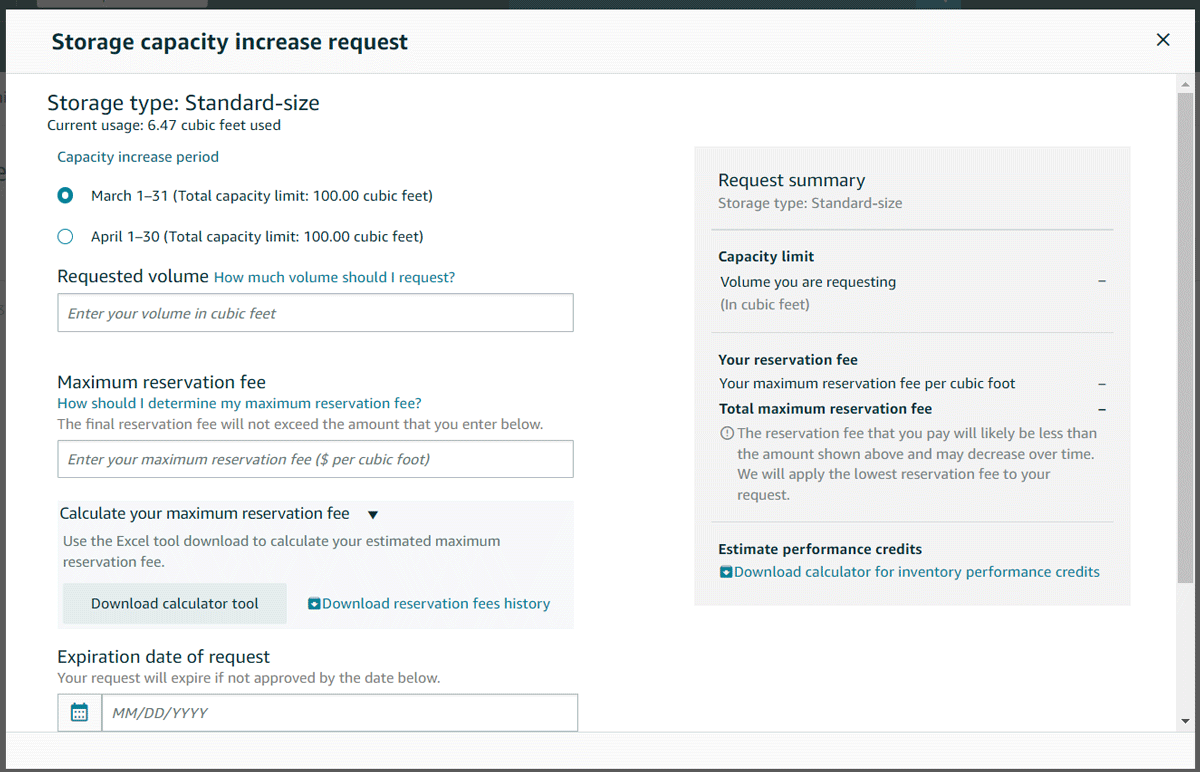 Some sellers have expressed concern over this "pay to play" model, which could negatively impact margins. To avoid losing money, don't bid for additional storage space unless you think you need it.

If you need help with funding, services like Kickfurther can help.

When you fund your Amazon inventory with Kickfurther, it frees up capital so you can bid for higher FBA storage capacity. If your bid is accepted by Amazon, we can provide additional capital to cover 100% of your increased inventory needs.

Kickfurther will fund up to 100% of your Amazon inventory costs on flexible payment terms that you control so you can put your capital on hand to work growing your business without adding debt or giving up equity.

You’ll have a separate capacity limit for each storage type each month. Amazon classifies each product’s storage type into five different categories:

Individual selling accounts are limited to 15 cubic feet of FBA capacity. This limit is not eligible to be increased.

New professional selling accounts that have been active with FBA for less than 39 weeks won’t receive capacity limits. This allows new sellers to establish an FBA sales record without limits so Amazon can determine how much space is needed as the businesses grow.

Amazon explains the process with this example:

Overage fees will be charged if on-hand inventory in fulfillment centers exceeds your capacity limit. This does not include open shipments. These fees are changed on the inventory that is held above your limit.

Amazon has several recommendations to help you make the most of your FBA storage capacity. Cancel any open shipments you’re not planning to send, as those count towards your total capacity usage. You can view or cancel a shipment in the Shipping Queue. Remove inventory that isn’t selling. You can have removed inventory returned to you, have Amazon donate it on your behalf, or try to recoup some cash through FBA Liquidations. You can also set up automatic removal orders for aging items or unsellable units.

Improving your FBA inventory sell-through rate is the fastest way to free up capacity for new products. It also helps increase your IPI score. Discounts, ads, and product page updates can all help you increase sales on Amazon. Getting more reviews is another great strategy since reviews impact buyer sentiment as well as your Amazon search rankings.

Related Reading: How to Use Amazon Coupons: A Seller's Guide

We want to hear from you! What do you think of the new FBA capacity management system?

Sign up for our newsletter to receive Amazon seller news straight to your inbox.

How to Sell on Amazon Without Inventory

The Ins and Outs of Inventory Data Management