When it comes to getting your share of the Amazon Buy Box, pricing matters a lot. In fact, competitive pricing is one of the Buy Box strategies that Amazon recommends to third-party sellers.

In this post, we'll explore how pricing affects the Buy Box.

Price's Impact on the Buy Box

Amazon does things a little differently than other online marketplaces. Case in point? The Buy Box. If, for example, you primarily sell on the eBay marketplace, the Buy Box concept might seem a bit foreign. We've written at length on this topic, but here's the important thing to understand: unlike eBay listings, Amazon funnels all traffic for a particular item through a single web page. The item's "Buy Box" (sometimes also referred to as the "Featured Offer") is the call-to-action button, clicked by customers adding it to their carts. This means that sellers compete for a percentage of the Buy Box clicks. (Click here to view Amazon's in-depth explanation of how it awards the Buy Box.)

As you familiarize yourself with how the Buy Box works, you'll quickly realize that pricing strategy is a very important factor. In fact, on Amazon's help page titled, "Becoming the Featured Offer," the first recommendation offered is to price items competitively. Pricing is such a hot topic among Amazon sellers that most professional merchants use an automated repricing tool. Everyone wants more of the Buy Box, and there's no question that pricing is top of mind for serious Amazon sellers.

Given that pricing plays such an important factor in winning the Buy Box, it's logical to assume that a price drop could boost order volume. And, for the merchant aiming to quickly scale his Amazon presence, it's not a terrible idea. Granted, short-term profitability might take a hit (especially when considering all of Amazon's order fees.) However, for the seller with the long term in mind, the temporary drop in margin might just be worth it.

To illustrate my point, let's look at an example scenario.

John's Toys & Games has been selling online for many years. John got his start on eBay.com, and he's since expanded to his own webstore. Amazon has been on John's radar for over a year, but he's struggled to get much traction. The toys and games he sells are very competitive on the Amazon marketplace, which means he's usually stuck at the bottom of the "Other Sellers on Amazon" page. Even on John's less competitive items, he usually loses out because of his weak feedback history. It's the classic "chicken or the egg" situation.

Here's what John decides to do next:

To get things moving, he drops prices on his Amazon listings by 25% across the board. Sure, this eats away at most of his margin potential, but he views it as an investment. Remember, John has well-established revenue streams through his own website and on eBay.com. Any sales volume generated through Amazon.com would be incremental business anyway.

John's plan begins to pay off quickly. Within a week of lowering prices, he notices a significant uptick in order volume. Instead of averaging just a few Amazon sales per week, orders climb into the dozens per day. After thirty days of testing this strategy, John's Toys & Games has the following metrics to show for:

Although John has very little profit from his Amazon orders, he has more importantly laid the groundwork for an invaluable asset: his Amazon seller reputation.

Having set a baseline, John slowly increases his prices and optimizes his feedback solicitation workflow. He signs up for a FeedbackFive trial, which helps him automate his feedback solicitation process, increase feedback conversion rates and monitor negative ratings. Each new order brings slightly more profit and an increased chance of receiving 5-star feedback. The increase in order volume and feedback also enable John to keep his products in the Buy Box longer. 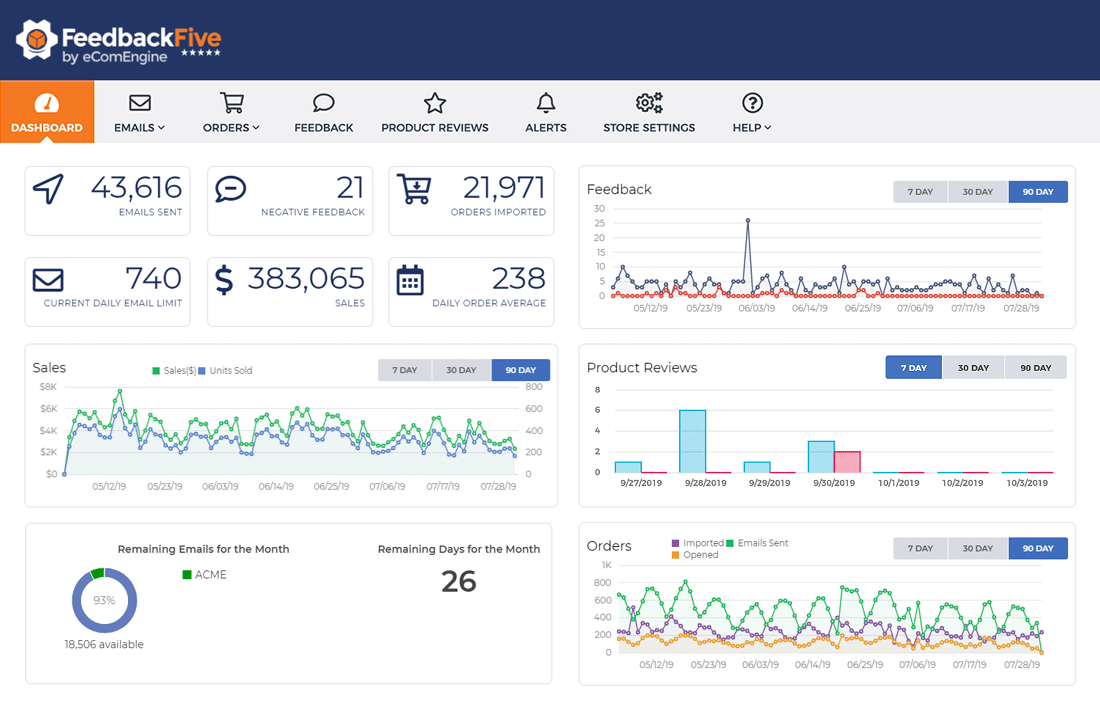 Competing strictly on price is probably not a great move in the long run. However, in certain situations, dropping your prices can be a viable short-term tactic for driving orders and feedback ratings. In other cases, increasing your price may make a similar impact.

Wondering how to get a look at the pricing landscape for your products? You can see the Featured Offer on the Manage Pricing page in Seller Central. The Pricing Dashboard shows real-time data about your pricing compared to other offers. You can also get pricing recommendations in the Selling Coach Pricing Report.

When it comes to your Amazon pricing strategy, it's important to avoid getting stuck in a race to the bottom. An algorithmic repricing tool like SmartPrice can help you maximize profits and keep your Buy Box pricing competitive. It also takes the guesswork out of repricing by automating the process to keep the focus on your business goals. For example, if your product is selling faster than you forecasted and your next shipment is delayed, you might actually want to price above the Buy Box to slow sales volume slightly and avoid going out of stock. SmartPrice makes it easy to control parameters like this on the product level.

Time to automate your pricing or feedback strategy? Maybe it's worth considering.