Selling on Amazon: Black Friday Data to Prepare for 2022

For retailers and bargain hunters alike, Black Friday weekend is the highlight of the holiday shopping season. Play your cards right and you can make a large portion of your yearly sales in just those four days following Thanksgiving. You can then invest those profits into the next year’s budget, setting the stage for even more earnings in the upcoming Black Friday.

While Black Friday 2021 was just a few months ago, it’s never too early to start preparing for the next holiday shopping period. We saw some fascinating Q4 data from 2021, so we thought it’d be a good time to give a full retrospective on Black Friday around the world.

This article covers the past, present, and future of Black Friday. We look at the history of Black Friday to understand its origins, review new data from the most recent Black Friday, and then put it all together for some advice you can apply when the next holiday season starts.

The Past: The History of Black Friday

It seems natural that, once Thanksgiving is finished, people set their sights on Christmas and the other winter holidays. For most people, it signals the start of the holiday shopping season.

But it was the American tradition of Thanksgiving parades that reinforced those associations. These parades were often sponsored by department stores (a good example is the popular “Macy’s Thanksgiving Day Parade”) who used the opportunity to advertise and encourage an early start to holiday shopping.

The name “Black Friday” itself is only loosely connected. It began as a term used by Philadelphia police in the 50s and 60s to describe the crowds that came into the city the day after Thanksgiving. The popular Army-Navy football match was held the Saturday after Thanksgiving, so a lot of spectators came in on Friday — and many of them used their spare time to go shopping.

Compared to Black Friday, Cyber Monday is a much more recent tradition, with the term itself first occurring in 2005. It started as a way to push online shopping during the fledgling years of eCommerce but has since become one of the biggest shopping days of the entire year.

When looking at these Black Friday vs Cyber Monday statistics for 2020, it's clear to see that both remained incredibly lucrative events:

Now let's examine how things fared even during a pivotal 2021 shopping season.

Now that all the dust has settled from Black Friday 2021, we’re able to analyze the data to see how it went.

The most noticeable shift in Black Friday 2021 is that online shopping was up, undermining the difference between Cyber Monday and Black Friday. According to Adobe Analytics, the entire month of November 2021 saw a sharp rise for eCommerce with $109.8 billion spent, an 11.9% rise from 2020.

At the same time, CNBC reports that foot traffic in brick-and-mortar stores during Black Friday fell by 28.3% compared to pre-pandemic levels. Although Cyber Monday sales also dipped by 1.4% year over year, the data still indicates an ongoing shift to online shopping, deepening the Black Friday vs. Cyber Monday rift.

How did Amazon do last Q4? Amazon data shows independent and third-party sellers hit all new highs last holiday shopping season, selling an average of 11,500 products per minute between Black Friday and Christmas day. More than 130,000 third-party sellers exceeded $100,000 in sales, with particular successes in the product categories of office supplies, cameras, and wine-related products. 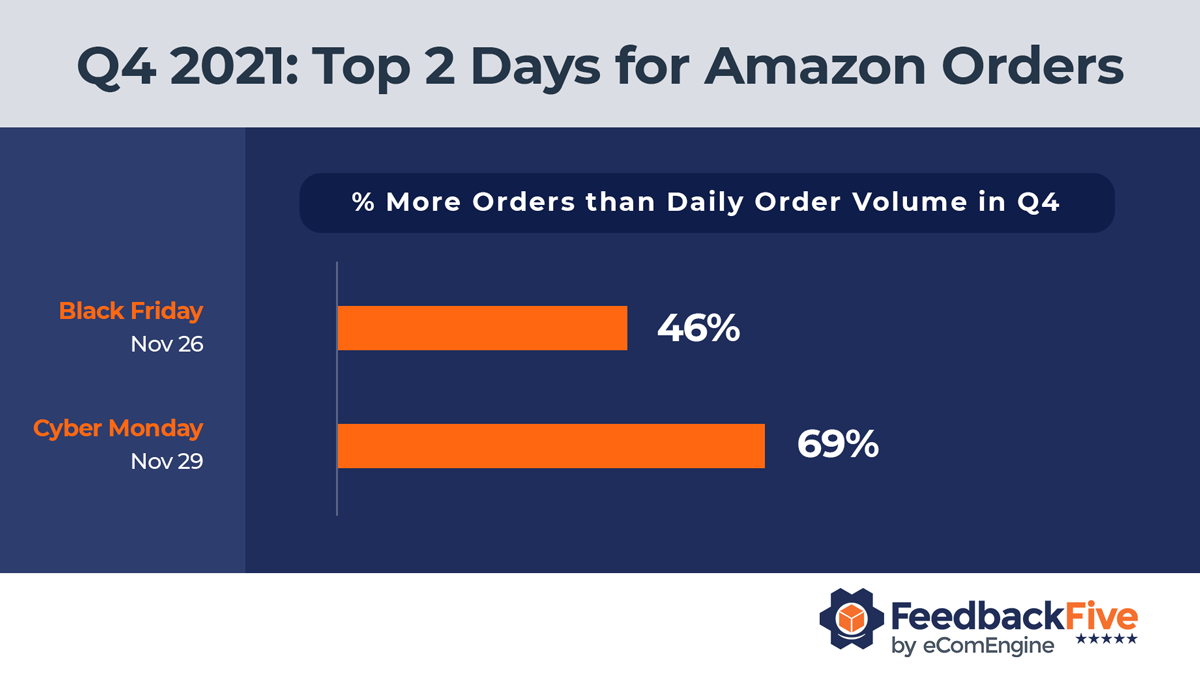 And when orders are up, reviews usually are, too. How did the increase in order volume affect review rates throughout the holiday season? Let’s take a look. 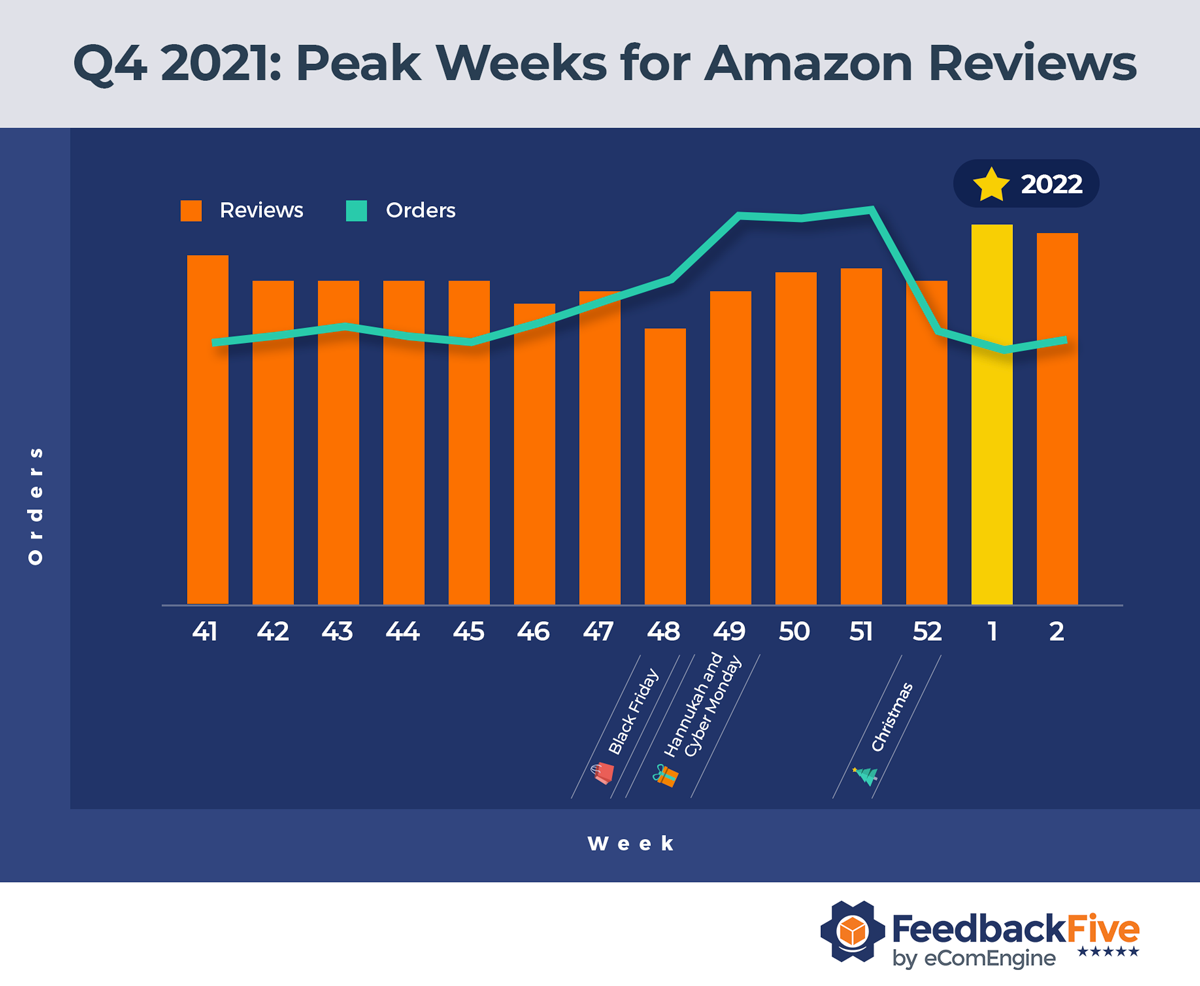 As expected, reviews dropped a bit during the week of Thanksgiving, and we saw an increase in reviews received the following week. The biggest week for reviews continued to be the first week of 2022, about a week after the Christmas holiday, with the second week of January also remaining strong.

Another interesting revelation from Black Friday 2021 is that more consumers are starting their holiday shopping even earlier than Thanksgiving weekend. When Deloitte asked consumers when their holiday shopping began, 70% said they started at the end of October, up from 66% in 2020 and 61% in 2019. This change in consumer behavior will have big effects on preparing for Black Friday 2022.

The Future: How to Prepare for Black Friday 2022

The big takeaways from the most recent Black Friday are:

What this means for Amazon sellers is that the best time to post Black Friday sales just moved up. Instead of waiting until November, you might want to consider testing the waters in October or even before, either to attract the early holiday shoppers or to give them a good reason to wait until after Thanksgiving.

If you manage your holiday shopping season well, you’ll bring in plenty of extra profits that can be carried over to next year’s budget. In essence, your Black Friday performance directly affects how you do the following year. That’s why it’s best to put as much as you can into preparation.

Aside from following our guide to driving sales on Amazon in Q4, you can also give yourself an extra advantage by using our software. FeedbackFive helps you manage negative reviews and elicit more positive reviews. Get a free demo now to see how eComEngine can help you next Black Friday.